The Method of “The Timing correction” 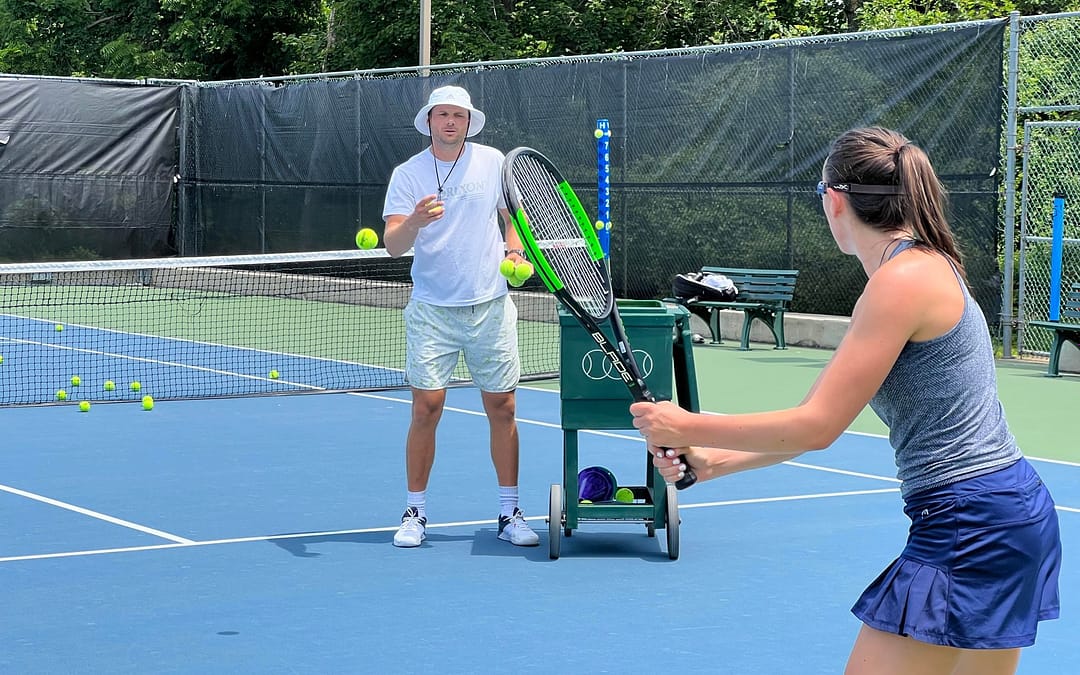 The Method of “The Timing correction”

One of the most challenging aspects of the game to control in tennis is timing.
Timing in tennis is the order of actions performed by a player before their
racket hits the ball. Timing depends on technical, physical and mental skills of
the player. The timing would depend on a player’s groundstrokes techniques,
such as the size of the backswing. Physically, it depends on a player’s footwork
and agility. The mental aspect depends on the reaction to the ball, projecting
its trajectory, anticipation of the bounce and coordination of your own actions
according to the ball flow. It is a combination of intellectual impulses and the
physical movements prior to every shot that is being hit.
Timing will vary from day to day and match to match due to following factors:
• The weather conditions: such as wind and humidity as it affects the ball
flow.
• The surface: Depending on the surface (hard court, grass, clay, green clay,
artificial grass) players will have to make adjustments.
• The game of the opponent: Every player will have different type of strokes
that will affect the other player’s rhythm by pace, spin, trajectory and
positioning.
• The current player’s technical and physical shape and the ability to adjust
the backswing of the groundstrokes.
• Current emotional condition of a player: The players’ anxiety and
nervousness during the match may hugely affect his/her ability to
recognize, anticipate and react to the ball.
The issues that may be caused by insufficient timing:
• raised number of unforced errors
• inability to perform desirable tactics
• becoming too defensive and less offensive
• reduced confidence level
• hesitation and inability to make decisions
That is why it is necessary for players to maintain and improve their timing in
their matches. The appropriate timing will allow players to strike the ball in
the most efficient zone and significantly reduce the number of unforced
errors. Players have to learn how to mentally manage the issues with their
timing during matches as it usually doesn’t affect just a certain stroke but the
whole performance overall.

Even though every player’s technique is individual and unique, the timing in
tennis usually falls under the same standards:
• The opponent takes the backswing – the player must start the split step
• The opponent hits the ball – the player finishes the split step
• The ball leaves opponents racket – the player recognizes the direction of the
ball and starts their movement to the ball
• The ball crosses the net – the player starts the backswing while still moving
to the ball towards the projectable bounce
• The ball makes the bounce – the players backswing ready, their feet are set
up in appropriate stance
• The ball is bouncing towards the player – the players racket is moving
toward projectable contact point
• The point of contact happens in the right zone: slightly in front and on the
side of players body
• The player finishes the swing and recovers towards the middle of the court
As you can see, timing in tennis is a very intensive process. It occurs in a very
short time period (approximately 2 – 4 seconds) that is performed thousands
times in a game. It requires ultimate focus, movement and technique.
Furthermore, during that small amount of time the player must make their
decision on shot selection, choose the direction of the ball, as well as its
placement and pace.
The following drill is designed to help players improve their timing. It is
mainly beneficial when used as a pre-match warm up, during the surface
change between the tournaments and windy weather conditions, as well as a
part of regular practice routine.
The “Bounce and shadow” is a two part drill which can be used separately or
all together:
1. “The bounce”: The coach feeds the ball to a player and while the ball is in
the air, the coach yells any number from 1-3, which will stand for the
number of bounces that a player must allow for the ball to make before
he/she makes the shot. The goals of the drill are:
• to increase players focus.
• to develop footwork.
• to improve players bounce anticipation.
• to challenge a player by giving them more or less time to prepare for
the ball (the least bounces the least time).

1. “The shadow”: The coach feeds the ball to a player and a player must
perform a shadow swing before he/she actually hits the ball. The goals of
the drill are:
• to work on lower and upper body coordination.
• to speed up the upper body actions such as backswing.
• to challenge players by reducing the time for preparation.
• to develop players speed
• to improve players’ reaction time

Finish both drills with regular hitting to see if the timing has improved. As you
can see, “The bounce” drill will benefit players who’s timing is rushed and
“The shadow” drill will benefit players who’s timing is slow. In both drills our
goal is to make players timing more sufficient to help them perform their best
game on a given day. As timing is always subject to change, every player may
have to be using one drill or another or both drills together, depending on
current conditions. When used as a pre-match warm up, this drill is a great
way to raise players’ mental concentration and mental focus.
This method of correcting one the most important skills in tennis has proven
its worth at national and international professional levels and the WTA and
ITF tournaments, including the Grand Slams. Since 2011, the players that I
have coached:
• improved their career best rankings ( Ksenia Lykina reached her career best
WTA doubles ranking at 108 and Emily Webley-Smith has reached the WTA
ranking of 113 in the world).
• participated at Grand Slams (Ksenia Lykina has participated at the Us Open
2016 and 2017, Australian Open 2017 and Roland Garros in 2017 in singles.
Emily Webley-Smith has participated at Roland Garros 2020 and
Wimbledon in 2021 in doubles).
• won multiple ITF events (Emily Webley Smith has won 18 ITF doubles titles
including the highest win of ITF $100,000 in Midland, USA since 2013.
Ksenia Lykina has won 4 singles ITF titles including the ITF $50,000 in
Fukuoka, Japan as well as 10 ITF doubles titles including the ITF $60,000 +
H in Toyota, Japan since 2011).
• became national champions and members of the national team (Ksenia
Lykina has won the National Russian Championship in doubles in 2015 and
was a member of the national team of Russia).