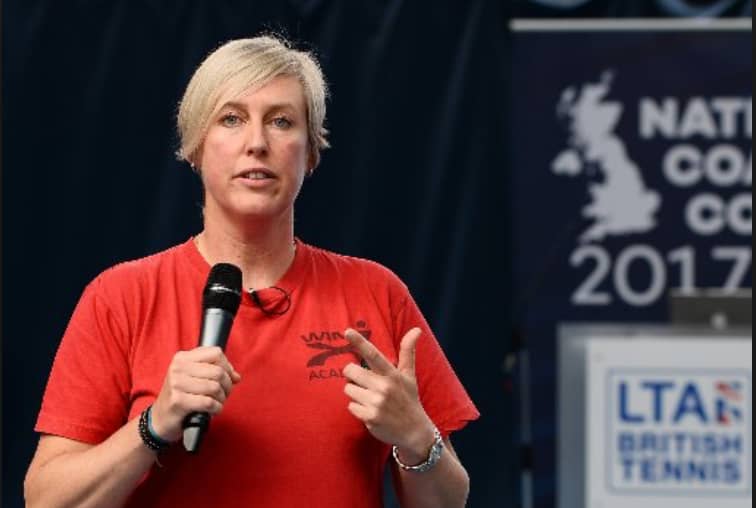 One of the long-standing issues within the sport of tennis is the retention of young female players. Despite the staggering dropout rate among young women in the sport, few policies have been implemented to combat this growing issue – which is where former British professional and high performance coach Jo Ward comes in.

Three years ago, Ward began work on her PhD and has dedicated an enormous amount of time to researching the psychological effect of tennis’ current environment on young girls. As a result of her research, Ward recently developed and administered the first-ever “Coaching Females: Research and Practical Applications” workshop in Great Britain.

“I’m a big believer that evidenced-based practices are the way forward because for too long in tennis it’s been those with the loudest voice and those with the strongest opinions dictate policy within different federations and around the world. I think we’re behind in terms of bringing peer reviewed information into tennis,” explained Ward.

In addition to fighting for gender equality within the sport, Ward also recognizes the significance of applying evidence-based research to on court practices. “It’s also important to research what we should be doing on court, how we should be coaching, and what tactics we should be pursuing. I think all of that needs a big shake up and we need to bring that research into tennis,” she elaborated.

Anyone who knows Ward would not be surprised to learn about her passion for research-based tennis coaching. In fact, if she could use just one word to describe her coaching style, it would be pragmatic.

“I’ve gone on through the whole process of education. I’ve done all the courses, I’ve been to all the workshops and I’ve been around all the best coaches,” said Ward. “Of course I’ve learned a lot through that process, but having been a former professional and having gone through the whole training program as a player, I look back on how much time was lost doing things that didn’t actually really resemble the kind of tennis you have to play in matches.”

“For me, I always bring everything back to ‘Do the players use it? Do the players need it?’ If the answer is yes, it’s worth spending a considerable amount of time on. If it’s just to make something look prettier, I see absolutely no reason to do it at all,” she explained.

Ward first began coaching for money to support herself through her education. However, she soon fell in love with the process of learning. “I’ve always loved tennis, and I’m really interested in how people learn, and how we as coaches teach. That combined with tennis is the root of my passion for coaching,” she said.

In order to continue the learning process, Ward began her PhD with a mission to bring research into the tennis world, particularly women’s tennis. After considering a variety of topics, she brought forth her idea to study the psychological effect of the environment on female tennis players to the LTA, who were interested in sharing and applying the research in an effort to keep more girls in tennis.

With the support of the LTA, Ward began further developing her workshop to help coaches connect better with female players of all ages. “The psychology of this workshop has come from my PhD and it’s all research based, but I’ve made it practical for coaches to go away and implement those ideas that evening when they step on the court,” she explained.

“The workshop also has physiological similarities and differences between girls and boys and explains how we as coaches can help our female athletes minimize the risk of injury and maximize performance,” said Ward. “It’s not about being a strength and conditioning coach. It’s about what we can do as normal tennis coaches to better help girls handle their bodies and work with what they have because they are different, and we don’t learn that in our qualifications.”

Additionally, the workshop also adopts a technical focus for coaches to apply to their teachings back home. “We look at the technical differences that you see within women and men and also younger players, and whether it’s worth spending time as a coach in pursuit of a certain style of forehand technique,” said Ward.

While Ward is currently administering her workshop throughout Great Britain, she ultimately has plans to deliver the content online for coaches across the globe. Until then, she urges coaches to take on research of their own.

“My first bit of advice to both male and female coaches would be to understand how little you know,” said Ward. “The second piece of advice is to go out and do some research. There are now a growing number of practitioners and websites who are starting to do more and more research in this area. You’ve got to go out and seek it.”

“My ultimate goal in all of this is to try and fill those gaps and have a coach education infrastructure and system that is 50/50 for males and females in terms of the content. Let’s not just always learn how Roger hits the ball. It’s equally important to dissect how the women are hitting the ball,” she said.

While we still have a long way to go in terms of gaining gender equality and keeping more females in the game, forward-thinking innovators like Jo Ward certainly bring us one large step forward in the right direction.